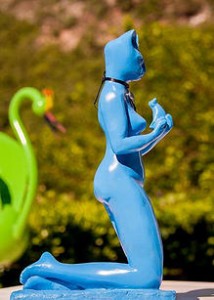 Pari Ravan, an incursion into the romantic surrealism.

Pari Ravan paints in oils and uses the techniques of the old masters.

Her romantic style recalls a surreal dreamlike atmosphere where each painting tells a story.

Pari won her first prize as a teenager at 14 years old in an art competition dedicated to Iranian youth.

She has then followed the teaching of Sadgpoor professor at the School of Fine Arts in Tehran.

At 17, she moved to Germany, took classes at the Art and Craft of Mainz in parallel to her medical studies and has later participated in exhibitions in Cologne and in Berlin.

From 1975 to 1979 she was the pupil of Baruch Elron, the Israelite painter of phantastic surrealism whose paintings are exhibited in many museums around the world.

Doctor, psychiatrist, psychoanalyst and airline pilot, Pari has left since 1994, a brilliant and accomplished career, to devote herself to her passion.

She won 18 awards through her life, and was recognized in 2007 with the price of the Eagle Nice International, then with the gold medal of painting in Cannes in 2008, and the Award of artistic Excellence in Kobe (Japan).